We caught up with Stages athlete and Carmichael Training Systems Coach John Croom to talk about his 3rd place finish in the Unbound Gravel 100 recently. John Croom raced on a Stages Ultegra LR Power Meter, Stages Dash L50, and can be found roaming the roads of Zwift via his StagesBike SB20 Smart Bike.

UNBOUND Gravel kicks off every summer in the heart of the Flint Hills, in the very own small town of Emporia, Kansas. With 4 days of events from, including five races and a gravel expo featuring over 100 vendors, Unbound is proud to be the world’s greatest gravel event.

Stages Cycling: First off, you did the 100 mile event instead of the 200 mile distance which made Unbound (formerly Dirt Kansas) a big deal. What’s up with that?

John Croom: I’m getting ready for US Track Nationals, so this was a decision I thought long and hard about. To do 200 miles…I think anyone can do it, but everyone recovers the same way and you’re going to be out of commission for a week to a week and a half. It tears you up, I don’t care if you’re a pro or some joe schmoe. That’s the reason why. I didn’t have time to recover and get back to training for track nationals.

Stages Cycling: That said you weren’t the only National caliber racer on the start line for the 100.

John Croom: For sure, there were some heavy hitters out there. Dave Wiens, Stephen Hyde, BrittLee Bowman, Ashton Lambie, Meredith Miller, Lauren Stephens, Chris Brown, the list goes on. And we were going for it. I averaged 290w for 3.5 hours until I flatted, and did the whole 105 miles and 5,800 vertical feet in 5 hours and 37 minutes.

Stages Cycling: Who were you watching? What was your game plan for race day?

John Croom: I headed out there to win. I went out there with the intention of training, but in my opinion even if you’re training, you’re racing to win. My goal was to ride solo for the whole race….go really hard from the beginning and hope people would forget about me and I could ride my own pace all the way in. I attacked in the first 10 miles and was by myself until Stephen Hyde bridged up at mile 70, and then I flatted at mile 80. The moment I flatted I was over it, having spent all this time by myself, and then after I flatted I pretty much just cruised in. I don’t know what would have happened if I didn’t flat.

Stages Cycling: A lot of riders got flats, including you. What is it about Unbound that makes it such a challenge for flats?

John Croom: It’s just a ton of sharp rocks, and so many ruts and different lines, and it changes. The first 20 miles is hardpacked mud, then from mile 30-50 it gets rocky and graded, some of the sections are pebbles and then the rocks can get pretty big, like baseball or tennis ball sized, and sharp and pointy. They’re big and scary and there’s a ton of them, and some dips. I flatted on this light descent going 25-30mph and rode a bad line, hit this hole and just bottomed out my tire and blew the sidewall. I was able to plug it and keep going but Hyde was gone.

Stages Cycling: What were you running for tires and pressure? Would you do anything different?

John Croom: I would maybe try Cush Core. I ran 700 x 38c Panaracer Gravel King SK’s. I was riding 33psi in the front and 35psi in the rear….I’m not a small guy but I didn’t flat due to tire choice or pressure, it was just what I hit. I’d rather run less than too much out there, the need to absorb things over most of the course and conserve energy is important and it was going really well until I cased that hole.

Stages Cycling: Kansas is not a place most people think of as a top cycling destination. What is it about the riding out there that makes it special?

John Croom: It’s just different everywhere you go. Every stretch of road was different and had something to offer. The scenery, the gravel, at the end of the day it was just a beautiful ride…clear skies, no clouds, lakes, woods, open fields, singletrack, doubletrack, towns, you just do so much. The conditions change and you have the opportunity to experience all styles of terrain from hardpacked mud to roots, then aggressive rock gardens. It’s crazy how much variety you get to experience and I only saw 3-4 cars the whole time, and that’s during the race as well as my pre-rides. There’s a ton of riding and variety. Only downside is there aren’t many gas stations so you are definitely on your own out there.

Stages Cycling: You’re based in Colorado Springs in the Rocky Mountains. Being in Kansas, Unbound is flat, right?

John Croom: It’s in Kansas but it’s not flat. I would say the first half is a gradual uphill, with rolling hills in the middle, and then you descend gradually all the way back into town. It was NOT flat…there are a few kickers that really put your teeth in. And this is just speaking of the 100…the riders doing the 200 don’t just do two laps same route. 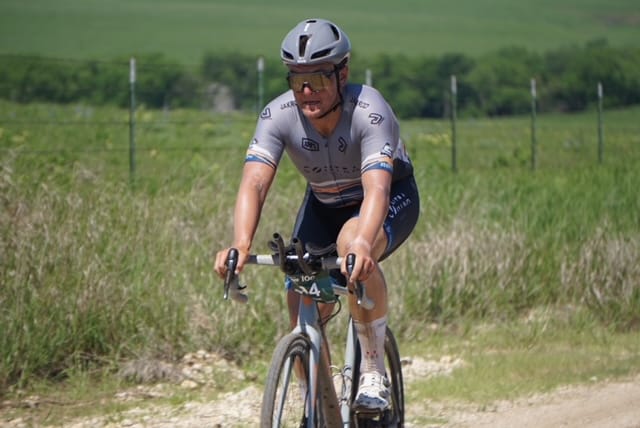 Stages Cycling: How do race tactics differ for a gravel race versus some of the other stuff you’ve done?

John Croom: It’s a lot about not knowing who’s who or what their goal is for the race. I know who Steven Hyde, Meredith Miller and many of the other riders are, but I don’t know what sort of mood everyone is in, for all I know they’re just hanging out and having a good time and can’t be bothered to chase riders down. People go in with different intentions. You might be riding with someone who just wants to finish, or someone who’s been training all year to win. It literally takes tactics off the table. In a track race we are all there to win. Some riders blow through the feed zones and others may be cracking PBR’s. You just don’t know, which is why I went hard from the gun and raced my own race.

Stages Cycling: What’s the weirdest thing you experienced out there?

John Croom: This random lake. In the middle of all these gravel roads in the middle of nowhere, it’s dry, hot and deserted, and you go up this hill, and it’s the biggest climb of the day, and around a bend and then suddenly there’s this huge lake and people drinking beer and boats and everything and it just came out of nowhere almost like a mirage.

Stages Cycling: What advice do you have for someone heading out to their first big gravel race?

John Croom: 1. Download the course to your GPS cycling computer (a Stages Dash L50 in my case) and make sure the course file is reliable. There may not be course markings, so it may be just you and your map in the middle of nowhere. It’s a good idea to ride the first 20 miles to make sure everything is working just to be safe. 2. Have 2-3 Co2’s, a pump, a tube, tire plugs and a chain tool so you can fix anything you need to on the fly. You might even bring a small flask of tire sealant and a valve core remover. 3. This almost goes without saying, eat and hydrate and have that all worked out.

Stages Cycling: So next year, You heading back for more?

John Croom: I think so. If I get in. I didn’t get in this year but the folks at BikeFlights got me in so I could do some work with them. I’ve gotten more props for 3rd in Unbound than I did for winning at the Pan American games. I should have got into gravel sooner!