One of the main benefits of using a power meter in your training is the ability to track fitness throughout the season and across multiple seasons. While scientists have traditionally relied on laboratory measures of various metabolic thresholds, our lives were made much easier with the development of the functional threshold power (FTP) field test. This test is great - it’s relatively straightforward and can tell the coach a lot about how the athlete is responding to some sort of training. As it turns out, it’s also one of the most important predictors of XC performance- generally speaking, if one’s relative FTP (W/kg) increases, that person will perform better. Seamus Powell (Giant Factory Off-Road Team) was a beast in his XC days, with an FTP hovering over 5 W/kg!

The growth and popularity of enduro racing has thrown a proverbial wrench in to the coaches’ cogs. Not only do we see successful riders transitioning from both XC and downhill which have their own unique physical demands, but the current research has not kept up with the development and popularity of the sport; we’re just not 100% sure what fitness variables relate most to performance. Sure, we get it – the demands of racing enduro are apparent and what we can do to make athletes better at it kind of makes sense to us – but it’s still too new of a sport for coaches and scientists to have much agreement. Fortunately one thing we do know is that any performance requiring intermittent anaerobic efforts will depend greatly on the aerobic fitness level. That is, generally speaking, we will recover better from really really hard efforts -like the short ones within an enduro stage- and be able produce big power again after a short rest if we have a higher threshold. So still, lots of coaches are relying on FTP to track their riders’ readiness.

But we’re trying to stay ahead of the game here. A less well-known concept is the idea of critical power (CP), which has been very well researched within the science community. This concept explains that we have a threshold power (the CP) above which we start to deplete a limited anaerobic capacity (anaerobic work capacity (AWC) or also called W’, with units in Joules). Importantly, once the W’ is depleted, we can’t go any harder than our CP until we allow time to recover.

Assuming a rider with a 250W CP and 10,000 J W’, a 500W effort for 40 seconds would mean the rider has totally depleted the W’ and could not exceed 250W again until he was given a lengthy recovery. This could be catastrophic in an enduro stage! While it’s a bit difficult to be able to track both variables on the trail at once, we can get a good indicator of these variables during training.

HOW WE DO IT

Currently, we think both of these variables –CP and the W’- could be important for Seamus and his performance in enduro, so we test and track them. Testing for CP involves a series of tests at a steady power, with the goal of going for the longest time possible at that power. It’s straightforward: we take two days when he is well-rested and get his best time for efforts at 600, 550, 500 and 450W; once he can’t hold the power anymore, the test is over. It’s important that they are steady and that we test for the best time at a power output. 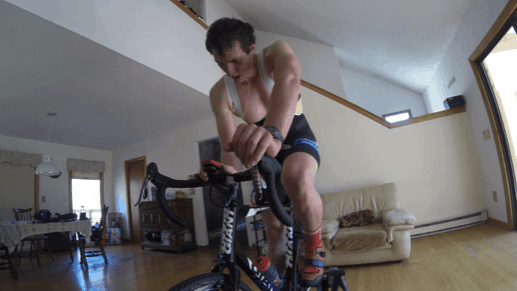 We always test the same way so we know we are comparing apples to apples. Seamus finds it easier to bang these out on the trainer. The power may be a bit different on the road, but that’s not the important part here.

The math gets a little complicated, but these performances are plotted on a curve with his power for time. When the curve starts to level out (the asymptote), we call that his CP, and the amount of work above that is the W’. While we’re not completely sure how these two variables work together during different types of MTB performance, it is possible to predict the point at which fatigue will occur (e.g. exercise ability limited to below CP) using the variables of CP and W’ in road cycling, which is pretty cool! Maybe one day we can do something similar with off-road cycling sports? 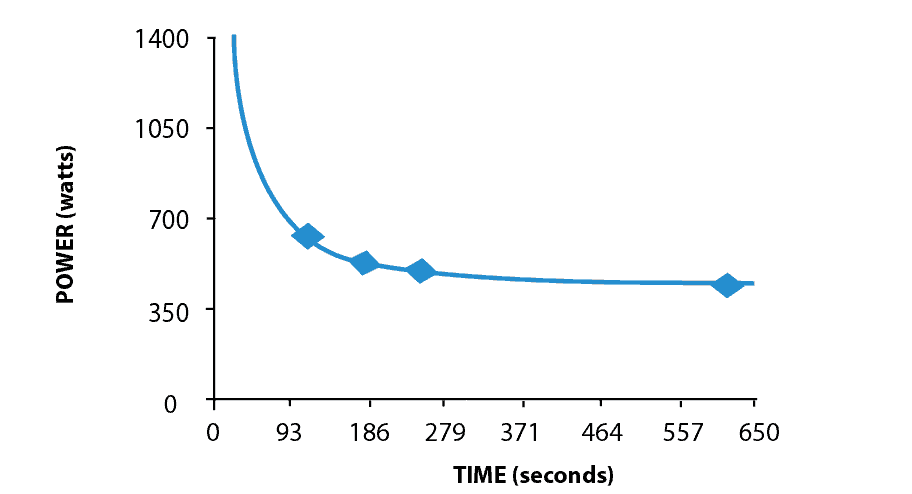 Here’s how the plotted numbers would look (though we haven’t used actual numbers). The below citation offers a fantastic resource to better understand and utilize these concepts. Clarke, D.C. and Skiba, P.F., Rationale and resources for teaching the mathematical modeling of athletic training and performance. Adv Physiol Educ, 2013. 37(2): p. 134-52.

The main benefits right now for the coach and rider are that these variables give us a better glimpse into both anaerobic and aerobic fitness, and can be tracked quite easily across a training program. Hopefully it can help lead to a more directed training program and more efficient utilization of training time. These concepts also give us a better idea of how hard the rider can go before things start to get messy… even if we are still trying to work it all out.

Matt Miller is a PhD Candidate and Assistant Lecturer at Massey University in New Zealand, as well as the owner of the MTB PhD research and coaching brand.