What is my FTP, and how do I find it?

Inevitably, just about every coach, website, blog, and magazine article about training will mention starting a training plan (with a power meter) with a test to determine Functional Threshold Power (more commonly referred to as FTP). In the below post Stages Power Education Specialist, Benjamin Sharp talks about how to perform testing to gauge fitness, and determine your Threshold Power and create Training Zones using Stages Link.

What is FTP?
How to Test FTP
How to get the best FTP test results
How to determine training zones
Reminder: FTP isn't everything

FTP is a proxy estimate for a certain physiological attribute. That is, the point when an athlete’s blood lactate (a byproduct of intense exercise) accumulates faster than it can be shuttled or buffered. This point is also known as anaerobic threshold. There are a few methods to define or measure one’s anaerobic threshold in a lab setting. These protocols require a calibrated ergometer (or treadmill) as well as a device to measure blood lactate levels in the blood and/or a mask to capture and measure expired gases. Typically, the athlete will perform a regimented step test with increased power requirements over set intervals. For example, the athlete might start at 150 watts and increase by 30w every 3m with blood being sampled at the end of each 30w stage. Depending on which measurement type you are using, your Anaerobic threshold could be defined as when lactate concentration exceeds 4mmol/L of blood or based on the respiratory exchange ratio. If you are interested in digging deeper into lactate threshold, here is an informative article by UAE EMIRATES TEAM coach, Dr. Inigo San Milan PHD.

Historically, doing FTP testing as described below, shows a strong correlation between the field test (outdoor or indoor) and the aforementioned lab tests. This means that, thanks to improved access to power meters, and the advent of testing protocols “in the field” (either on the road/trail, or on a trainer), FTP can be estimated and serve as a proxy for Anaerobic Threshold, without the need to pay for and go to a lab. The information that is gathered from FTP field testing and the results of lab tests closely correspond.

FTP is a concept refined by power authority, Dr. Andy Coggan, as an estimation of the amount of work you are able to do for an extended period of time, approximately one hour. It serves as the basis for loads of other important metrics (e.g. TSS, CTL, ATL, TSB, etc.) that will be covered in future entries. Most immediately, the Threshold Power value serves as the cornerstone to setting up training zones.

One concept that becomes immediately evident when training with power, is that power is anchored in time. In other words, the longer your event, (be it an interval, training ride, race, etc.) the lower your maximal average power can be. Fundamentally, I think this is pretty well understood, if not articulated. No one would expect Usain Bolt, for example, to be able to maintain his 100m sprint speed, for the duration of a marathon. And in the world of cycling, Filippo Ganna is not going to attempt to ride a 50km road time trial (an event lasting 70 minutes or so) at the same power output as he did during his 4km Individual Pursuit world-record-setting ride, that took just a hair over four minutes. The screenshot below shows an athlete’s “power curve” (blue line), that is their best performances (measured in average watts, in the y-axis) for different time spans (x-axis) over the course of a year.  Below the graph is a chart with the same data.  As you look to the right and extend the time span, it’s clear that the amount of power that has historically been produced for that time period, decreases as the time increases.

How to test FTP

Although FTP is defined as the amount of work that can be sustained for about an hour, there is some reprieve. Rather than asking athletes to attempt a one-hour maximal effort to determine Threshold Power, the most frequently used protocol as developed by Hunter Allen, co-author with Dr. Coggan of Training and Racing with a Power Meter, is significantly shorter. The protocol itself is actually quite simple: after a substantial warmup, start a lap on your head unit, and smash it for 20 minutes, as hard as you can. The average power recorded for the 20-minute test is multiplied by .95 to estimate what your “hour of power” (or Threshold Power) would be. Remember, the amount of power one can average for longer durations is going to be less than for shorter durations and for the majority of the population, reducing the “20-minute best” by 5% serves as an excellent approximation of what could be accomplished for an hour. This workout, the “FTP Test” protocol comes pre-loaded in the “preset” folder on the Stages Dash. Below is an image of an example of a possible screen configuration on the Stages Dash, with the test protocol loaded across the bottom. 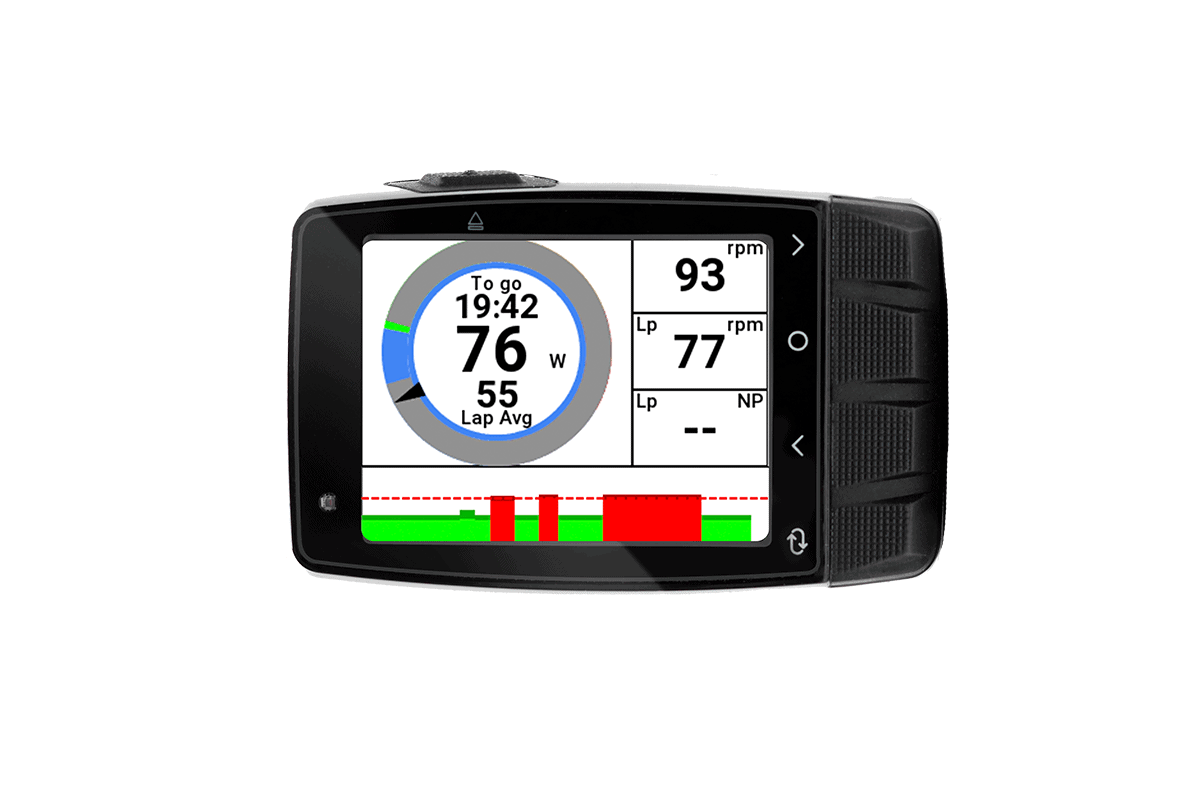 The ideal terrain for a 20-minute test is a moderate (3-5%) steady climb that can be ridden safely without interruption (e.g. no stop lights). Of course, most of us might not have access to terrain that meets these requirements. A flat road (with the same requirement for safety) will do and of course, riding the test on a stationary trainer indoors is a great alternative.   If riding outdoors, safely negotiating a couple turns (provided a complete stop isn’t required) is perfectly acceptable.


How to get the best FTP test results

“Smashing it” for 20 minutes might sound pretty straightforward but, to get the most out of your test, some intelligent pacing will be required. When prescribing a Threshold Power test to my athletes, I encourage them to break the test down into smaller, more manageable chunks, e.g., four five-minute efforts. For each five-minute time period, have a soft goal for average wattage. Trying to increase the average power for each five-minute segment (compared to the segment prior) will go a long way to helping you achieve proper pacing. As you get to the end of each five-minute portion, make an assessment based on your rate of perceived effort (RPE) and ask yourself, “Can I keep up this intensity? Can I increase the intensity for the next five minutes and the remainder of the test? Should I back off or maintain intensity for the next five minutes?” When it comes to the last few minutes, you should be at full effort, eking out every last bit of energy to assure that you have averaged the highest power possible. I refer to the wattage goal as “soft” because no matter what the goal power might be, you are going to be limited by your feeling on a given day. You might be able to do more work than you anticipate and you might not be having the absolute best day and will potentially fall short of your expected power output. Don’t let expectations get in the way of having your best test. Remember, the goal of testing isn’t to meet a particular number but rather, to measure the best performance you can do on a given day. Being in tune with your RPE is critical.

The strategy mentioned above is intended to mitigate the risk of falling into one of the common pitfalls when executing a field test.  The absolute most common mistake is to go out too hard and either completely stop before the end of the 20 minutes or drop power significantly. Next most common, is the issue of going too easy to start and having a bunch of energy left at the end to accelerate hard “to the line”.

How to determine training zones

With your new Threshold Power number in hand (best 20-minute power x .95), you can create training zones. With some simple calculations, you will be able to determine your training zones based on Allen and Coggan’s chart below. 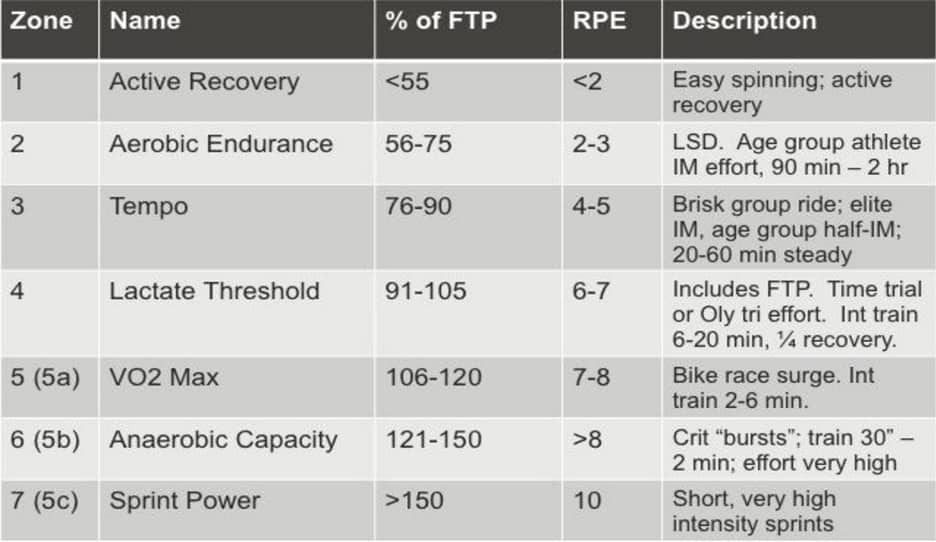 Note that for every coaching philosophy or paradigm, there is a different way to create training zones. The Coggan zones, as displayed above, are just one of many possible ways to create zones. Stages Link allows you (or your coach) the ability to use a default breakdown of training zones or to customize your own zones. For the example below, the athlete’s threshold (240w) is input into a field in the top-right corner and the zones adjust automatically based on the percentages above and below FTP associated with each zone.

One word of warning about FTP. Since power meters have become ubiquitously available over the past 10-15 years, and therefore the relative ease and frequency with which FTP can be tested, FTP has received lots of attention and in some circles has even taken on a role as the end all, be all metric. While the ability to work at a high level without accumulating blood lactate is a very important component to success in endurance sports, it’s only one of myriads of factors. Outside a perfectly flat, perfectly paced time trial with perfect aerodynamics and perfect equipment, FTP is not going to win too many events. For most athletes, whether in a gran fondo, local group ride, endurance mountain bike cross country event, cyclocross race, gravel grinder, or local criterium, success is going to be dependent on a robust development of all energy systems. Years ago, I was part of an internet forum for cycling coaches and athletes that were using power meters. It was a great way to share information and one of the nuggets I gleaned from way back then was that FTP is a good measure of at what level you will be competing. But, sprint power, anaerobic capacity, and VO2 Max are better determinants of how well you will do when competing at that level. I am paraphrasing here, and I wish I knew to whom I could attribute that thought. The basic idea is that within the realm of bike racing, and the categorization of riders from category 5 beginners to professionals, there will be an ever-increasing FTP associated with participants. However, the winners of the races, within those categories, will not specifically be those with the highest FTP. FTP represents aerobic ability but more commonly, success in most events requires more than a high FTP.

Now that you are armed with an understanding of FTP, a method for testing for FTP and subsequently, your training zones, I suggest you record some of your regular rides and take a look at the files afterward to see how much time you are spending in each of your zones. This information can go a long way to helping determine what the demands of a ride/race/event are and potentially guide your training a bit, to meet those demands.

ABOUT BENJAMIN SHARP: Formerly a program director for USA Cycling, Benjamin Sharp is the resident Power Education Specialist for Stages Cycling. Prior to joining the Stages Cycling team, Benjamin spent seven years coaching the USA Cycling National Team. Under Benjamin’s guidance, riders racing for various national programs won 13 World Championships, and stood on 8 additional World Championship podiums. Benjamin’s crowning achievement was coaching the US women’s team pursuit team to the silver medal at the London Olympic Games in 2012. An accomplished athlete in his own right, Benjamin has amassed more than a dozen national championships and two masters track world championships in a cycling career that has spanned three decades. Benjamin is a USA Cycling Level 1 coach and has earned the USA Cycling Power Certification. As a coach, Benjamin’s strength is making accessible to the masses, the science of high-performance elite athletics. As a Continuing Education provider for Stages Cycling, Benjamin now spends his time educating professional, amateur, and indoor athletes alike on the virtues of training with power.